Radio 4 is running the story of an unfair dismissal case as part of its Untold Story series. Due to be broadcast at 11am on Monday 6th November. The opening story features care home employee, Rachel Burns as she prepares for an Employment Tribunal.

Ms Burns organised weekly music nights in the home which were apparently well received by residents.  She attended the events herself and posted photographs of residents on her Facebook page.

The tribunal heard evidence from a member of the family of one resident. They confirmed that residents enjoyed the music nights and would have freely consented to the postings in question. 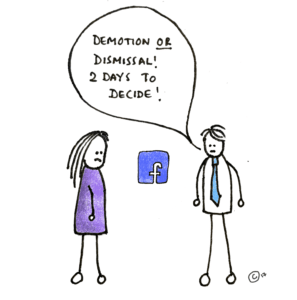 When Ms Burns’ postings came to the attention of her employers, she was suspended. At the time she had been suffering from depression and anxiety. This had been brought about by family bereavements and her husband’s deteriorating health.

Her employer, subsequently offered either a final written warning alongside a demotion to a position 8 grades beneath her or dismissal.  Ms Burns asked for more time to consider the offer but the employer insisted that she made a decision within two working days.

Ms Burns, in part due to her state of mind, was unable to make a decision. She, therefore, asked her employer for more time to think. The employer, however, refused. They then gave the claimant 12 weeks’ notice of dismissal.

Ms Burn’s issued a claim to an Employment Tribunal for unfair dismissal and disability discrimination (on the basis of her depression and anxiety).

The tribunal found that she had been unfairly dismissed. This was due to the failure by the employer to allow her sufficient time to make a decision of such importance. Particularly in light of the fact that she had told her employer that her GP had considered her unable to make such a decision at that time.