Michael Fallon resigns as Defence Secretary, following an allegation of sexual harassment, his resignation letter states that “in the past” his behaviour “had fallen below the high standards that we require of the Armed Forces”.

Whilst there may be other allegations of harassment in the swirl of accusations, denials and apologies circling around Westminster as part of the list of 40 MPs including 15 Ministers who are deemed to have acted inappropriately towards female staff, journalists and lobbyists, the only incident which has been made public as far as Mr Fallon is concerned is one which took place 15 years ago.

Fallon had previously apologised for repeatedly putting his hand on a journalist’s knee in 2002 at a Conservative Party Conference dinner.

Does a hand on the knee amount to sexual harassment? 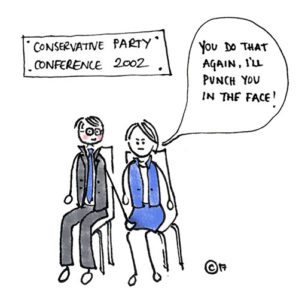 Sexual Harassment under the Equality Act 2010 is defined as unwanted conduct which has the purpose or effect of violating dignity or creating an intimidating, humiliating or offensive environment.

In most circumstances, repeatedly putting a hand on a person’s knee would unquestionably fall foul of the definition of harassment – indeed employees have made successful claims to Employment Tribunals for less.

The situation here may be different because Julia Hartley Brewer, the owner of the knees in question, has stated publicly when questioned about the incident that “no one was remotely upset or distressed”, that she does not consider herself to have been sexually harassed and that she does not regard the incident “as anything but mildly amusing”.

Legally, it is the perception of the “victim” rather than the intention of the “perpetrator” that is relevant.  That fact alone is the reason why the all too frequently trotted out defence of the office letch, “it was just banter” and “I didn’t mean anything by it” holds little water in courts and tribunals.

In Mr Fallon’s case, and in the light of Ms Hartley Brewer’s clear comments, it would appear that Mr Fallon may not in fact have subjected her to sexual harassment.

Whether more allegations emerge about the former minister which may have prompted his resignation is yet to be seen. Watch this space.