Constructive dismissal, whilst being a category of unfair dismissal is significantly different from a normal dismissal. 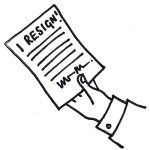 Constructive dismissal at its most basic, is when an employee feels that they have no choice but to resign after their employer fundamentally breaches their contract.

This breach can be of either an express term (such as a breach of the hours that they are meant to work) or an implied term.

What is an implied term?

In every contract there are a few implied terms which need not be in writing but are nevertheless included in the contract. This can be down to custom and practice or established through common law.

The most important implied term with regard to constructive dismissal is that of the duty of trust and confidence. There is assumed to be a duty between the employer and the employee to act in such a way that it won’t destroy the relationship between each other.

If you feel the employer has acted in such a way to breach this duty there may be grounds to make a claim for constructive dismissal.

The most common example of this term being breached is when you feel you are being bullied or harassed by your employer.

What does the employee have to prove?

Unlike unfair dismissal claims where it is up to the employer to prove the dismissal was fair, it is down to you to show that you have had no choice but to resign in a constructive dismissal claim.

The main stumbling block you have to overcome is showing that the breach performed by the employer was fundamental and not a minor breach.  In other words you have to prove that the conduct or treatment that you are complaining about is serious.

You also have to show that the reason for the resignation was because of this breach by the employer and not for another reason such as finding alternative employment elsewhere.

If you are contemplating claiming constructive dismissal we would strongly advise you to try and deal with the matter internally before resigning. This means trying to deal with it informally and then if that is unsuccessful submitting an official grievance with regard to the breach by the employer.

Without the support of the grievance it is unlikely that any constructive dismissal claim will be successful at tribunal unless the breach was incredibly serious. For example, if the employer was to physically assault you.

If you feel you have to resign following a grievance you should consider your resignation and the timing of it.

Within the resignation letter you should make sure that you make it clear that the reason you are resigning is because of the breach by the employer.

You should also make sure you do not leave it too long before you resign following the grievance. Otherwise the Tribunal may consider that you have accepted the breach made by your employer which would lead you to being unsuccessful.

If you feel that you are potentially being forced out and have submitted a grievance to do with the behaviour of your employer please do not hesitate to contact us on 0800 756 6605.

Our team will then be able to advise you on whether you have a potential case and whether it is something we would be able to assist with.