What is a Settlement Agreement?
What is the difference between a compromise agreement and a settlement agreement?

What is a Settlement Agreement?

A settlement agreement is an agreement between an employee and employer to end the employment contract under mutually agreeable terms. It settles claims that the employee may have against their employer.

It usually means that the employee will give up the right to bring any kind of tribunal claim against the employer in return for a severance payment.

It is generally used in connection with the ending of an employment, but it doesn’t have to be. They can also be used if the employment is ongoing, but the employee and the employer want to settle a dispute between them.

Essentially, a settlement agreement is a contract which prevents employees bringing claims against their employers.

There are an assortment of names and slang terms to refer to them:

A settlement agreement is a way for the employee and the employer to ‘part company’ on certain agreed terms. Under the agreed terms, the employee waives (or gives up) their right to bring any claims against their employer.

employees and employers are able to suggest a settlement agreement 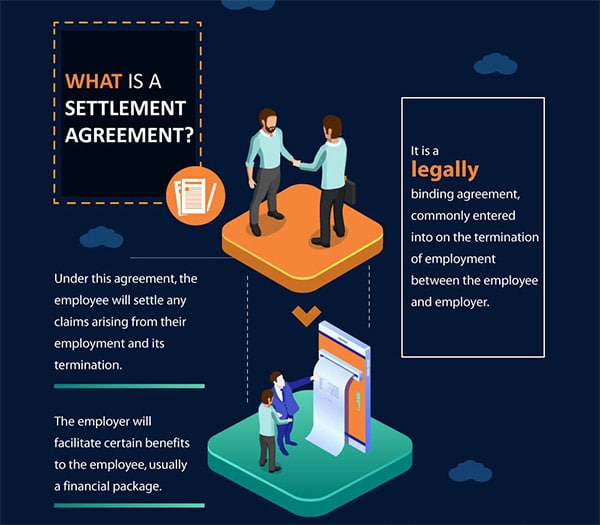 What is the difference between a compromise agreement and a settlement agreement?

The change was largely cosmetic with the major change being that it can be offered to the employee even if there wasn’t an ongoing dispute between the parties.

Compromise agreements could only be offered if there was an ongoing dispute within the workplace.

When can they be used?

The key element of a settlement agreement is that it is fair. Each case needs to be dealt with individually.

For example, one person could be seeking money whereas another might be looking for a good reference, or perhaps to be reinstated in their job after being sacked.

However, the majority end up in a ‘clean break’, which is when the employee and employer go their separate ways.

Having said this, there are occasions where the employment relationship continues on afterwards. 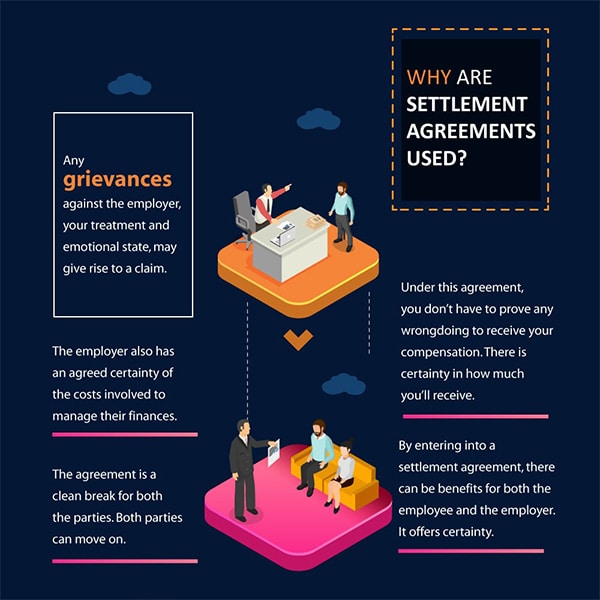 If the employee’s post is redundant and the employer is using a settlement agreement instead of going through a consultation process. The employee may not get additional redundancy pay which they could have been entitled to under their contract (or by means of a statutory redundancy payment). However, in return for signing the agreement the employee could be paid in lieu of working their notice.

If an employer has evidence that the employee has committed misconduct, or they have concerns that the employee’s performance is not up to expectation the employee could be offered a settlement agreement instead of being dealt with according to normal procedures, in return for them to leave the role quietly.

In this case instead of money the employer might offer to provide the employee with a basic reference, enabling them to find a new job without the stress of a hearing or the risk of a dismissal on their record.

In an unfair dismissal:

If the employee has raised an unfair dismissal claim against their former employer and the evidence is overwhelmingly in their favour.

The employer may want to avoid the matter going to the employment tribunal and so in this scenario a settlement agreement is used to settle the claim for an agreed amount between the parties. This agreed amount may not be the maximum value of the claim but it eliminates the risk of losing the claim at tribunal.

If a discrimination claim has been brought against the employer and the company is certain that the claim is false, however, they are prepared to settle the claim out of court to save the cost of defending it using a settlement agreement.

The company might offer only a portion of the potential value of the claim and no more than the cost to them if they had to defend it. In some circumstances, the employee may be able to keep their job.

If an employee has a terminal illness and their health is failing. They are classed as a disabled person and therefore protected against disability discrimination under the Equality Act 2010.

If an employee is no longer able to work (even when if the employer has made adjustments for them), the employee may agree to resign in exchange for an ‘ex gratia payment’.

This means money to which they have no contractual entitlement. In order to make sure the employee doesn’t decide retrospectively to bring a disability discrimination claim the employer will use a settlement agreement to prevent this from happening.

A settlement agreement could be used if an employee is not performing to expectation and neither party wants to undertake a long capability process.

If both the employer and the employee are willing to bring the employment to a quick end on agreed financial terms.

Settlement agreements can also be used to terminate an employee’s employment and can settle an ongoing claim they are bringing in a court or employment tribunal.

The terms will be mutually agreed between the employer and employee. Those terms will then be set out in the written settlement agreement document, which will identify the claims which the employee agrees not to pursue in exchange for the agreed payment.

Any settlement agreement an employer uses should be customised for the specific employee and their individual circumstances. They must include a clearly expressed waiver of the specific claims which the employee has or could feasibly have.

What are the key points about Settlement Agreements?

How can they be reached?

In order for an agreement to be reached there are several things that need to happen.

The employee should be given reasonable time to consider the agreement and be allowed to consult with their chosen legal adviser on the terms of the agreement.

It is entirely voluntary and an employee does not have to agree to it or even enter into discussions or negotiations about them if they do not wish too.

Unfortunately, there is no obligation on the employer to allow the employee to have a representative at the meeting.

However, in the majority of cases the employer does allow either a work colleague or union rep to attend the meetings as it tends to progress to a swift agreement and conclusion to proceedings.

What should they contain?

The agreement usually contains several standard sections. These include:

Why do I need a legal adviser?

It is important that the employee gets legal advice on a settlement agreement to ensure that they fully understand the implications of signing away their right to issue a claim to a tribunal and that they are receiving the correct compensation based on length of employment, salary and other factors. 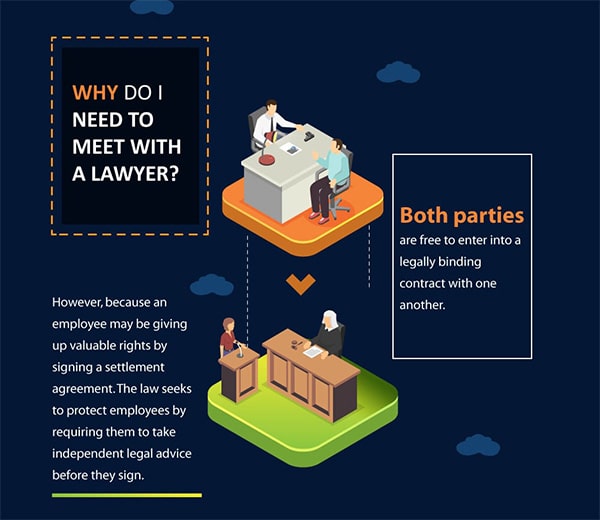 What if settlement agreement cannot be reached?

If an agreement cannot be reached then there are other options available to the employer. They may use other methods to resolve the dispute, for instance:

However, if these routes are pursued and the employer does not carry out procedures correctly it may be possible for the employee to bring an unfair dismissal claim against them.

Is a settlement agreement the same as redundancy?

What is a redundancy?

Redundancy is when an employer cuts down their workforce because a job or jobs are not required. It is defined by the law.

If an employer is intending to make staff redundant, it must go through a fair redundancy procedure before choosing which staff to make redundant.

On a basic level it should include consultation with affected employees and also offering the consideration of alternative employment for the employees with a right to appeal.

To do this can be time consuming. Sometimes an employer will offer staff a settlement agreement as an alternative and less time-consuming option.

Is it reasonable to offer this type of agreement instead of redundancy?

In principle there is nothing wrong with this and the employee does not have to accept the settlement agreement.

If they decide to turn it down, the employer can still go through the redundancy process. The employee may want to take legal advice to ensure the process is being administered fairly or if they have a claim to compensation for unfair dismissal.

In many situations, the employee may prefer to accept the settlement agreement because it may offer to pay more money than they would receive following a standard redundancy procedure if their employment was terminated.