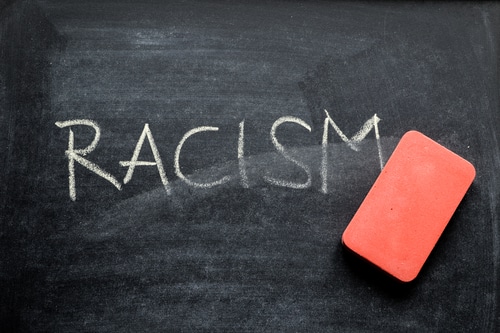 How can we say humanity is at the furthest it has ever gone in terms of advancement, progress and knowledge and yet with such mental resilience find reasons without concrete fact that is universally applicably like gravity to racism? How do you for the quest for knowledge throw away consideration for your fellow man? Scruton, a distinguished philosopher, is among the many ‘intellectuals’ to hold this opinion.

As it is widely known, ‘for every force, there is an equal but opposite force’ likewise for every good, it is to be expected that there will be evil. This in no way is to say that Racism is acceptable. No. Racism is unacceptable and under no circumstances is it justifiable. There is a difference between racism and fighting for injustice and one’s rights.

Unresolved anger is one major reason as to the proliferation of racism between all ethnicity. Immigrants come into a country looking for a better life and once settled, bring in the rest of their families who end up working jobs while minority of the citizens of the country are still looking for jobs. These immigrants come to a plethora of legal privileges and welfare benefits that few indigenous citizens have a right to and enjoy while contributing close to nothing in return. It is synonymous to working hard all day and having someone barge into your house and reap the benefits. Yes, it is understandable; however, this in no way condones racism as the best mode of action.

Ironically, for a generation that has accomplished so much more in 10 years than it has in a 100 years, we are still ignorant of facts. One in 20 of those occupying social housing in the UK were foreign nationals. Secondly, new migrants have fewer rights to benefits than indigenous citizens. Facts!

It is never okay to cause hurt physically, mentally and emotionally to a human. Racism is exactly this. Racism causes physical, mental and emotional hurts to its victims which leave scars that can never heal and as a result of this, hatred is passed from generation to generation until we have a generation that hates each other without probable cause. A generation whose source of hatred traces far back in history and yet we claim we have come so far. Such a pity.

It could be argued that if the angle being played was from fear such as fear of terrorists, then stereotyping of individuals would be more understandable than the blatant hatred for a fellow man.

“Europe is committing suicide by allowing Muslims integrate into their system” This is a statement that was made by Spectator associate editor Douglas Murray. Although speaking in the case of the law, those who feel this way and express it in such form have only expressed their feelings which are in line with the law however; this is not to say that one must agree with it.

To say this is to show complete ignorance of the bigger picture. Being bitten by a dog does not necessarily mean all dogs should be killed or caged based on that one experience, the same is applicable here. The crimes and atrocities committed by terrorists or race, do not speak for the entire race. There are individuals who find themselves victims of circumstance. It would be unfair to make this claim. Who knows, it could be a Muslim who could run for office thereby propelling the nation or a country forward. No one knows tomorrow and as such no one should make assertions about tomorrow. Words like these are a complete insult to foreigners who have made immense contributions to the economy of a country that is not theirs. It is complete ignorance of the everyday good that is being done by well-meaning foreigners.

Rather than say this, it would be more proper to address the issue of properly identifying those who could be a threat to the nation from those who only seek to find refuge and a better life. This is probably something Scruton and his cohorts should consider.