Religious and belief discrimination is prohibited by the Equality Act 2010.  This means that it is unlawful for an employer to discriminate against a person because of their religion or belief.

Treating a person less favourably, whether intentionally or not, because of their belief/religion or lack of it when compared to a person who does not share their belief or faith.

Applying a policy, criteria or provision equally to everyone but the effect to a person of a particular faith or belief is disproportionately worse than a person without faith or not holding a particular belief.

This is any unwanted conduct which has the purpose or effect of violating a person’s dignity or creating an offensive, intimidating, hostile or degrading environment for them.

This means any detrimental treatment as a result of taking steps to prevent harassment.  That could be making a complaint, acting as a witness for a colleague or taking an employer to an employment tribunal.

Lack of belief or religion 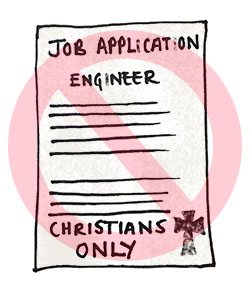 It is also unlawful to discriminate against a person because they do not have a religion or a belief.  For example because they are a humanist or an atheist or if they do not follow a particular religion.

A company could not refuse to employ somebody because they were not a catholic and everyone else who worked for the company was a catholic – except where there was a genuine occupational requirement such as being a catholic priest.

Unlike other protected characteristics, religion and belief can be surprisingly difficult to define. The mainstream religions are obviously afforded protections but what about cults or religions only followed by a handful of people or even a belief in protecting the environment or home schooling?

The Equality Act must be interpreted in the light of the Human Rights Act which incorporated Article 9 of the European Convention on Human Rights into British law.  The Article provides for freedom of religion, thought and conscience and as such requires British courts to adopt a wide interpretation of religion.

Mainstream religions are obviously covered by the legislation as are less commonly practiced religions such as Druidism and Wiccan (witchcraft religion).

Philosophical beliefs are protected in the same way, and to the same extent, as religious faiths and beliefs.  A key case in this area is General Municipal Boilermakers Union v Keith Henderson [2014] in which it was said:

“All qualifying beliefs are equally protected.  Philosophical beliefs may be just as fundamental or integral to a person’s individuality and daily life as are religious beliefs.”

A belief in climate change and the need to act responsibly to prevent it has been considered worthy of protection.

Some political beliefs may also be covered by the Equality Act.  The above case of Henderson concerned the case of a man who held left-wing democratic socialist views.

Vegetarianism and veganism have also been held to be beliefs worthy of protection.

Anti-fox hunting has been considered a belief by the courts as has belief in animal rights.

Spiritualism (a belief that the dead can be contacted after life) has been deemed capable of being a belief.

In the case of Grainger, The Employment Appeal Tribunal provided guidance on identifying philosophical beliefs.  It included 5 criteria for protection under the Equality Act:

Following this guidance tribunals have decided that Holocaust denial was not a belief worthy of protection, neither was the belief that 9/11 was a false flag conspiracy by western security agencies.