Gross Misconduct and the Burchell Test Skip to content

British Home Stores Ltd v Burchell [1978] IRLR 379 is one of the most well known and often cited employment law cases.  It sets out the test by which Employment Tribunals can decide whether employers have acted reasonably in dismissing employees for misconduct and capability issues. 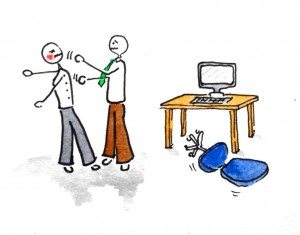 In terms of misconduct, the Burchell case could be reduced down to a three step test:

Employment Tribunals do not concern themselves with decisions about whether an employee was in fact guilty but whether it was reasonable of the employer to decide that they were guilty and then dismiss them.  In other words, did the employer come to a reasonable decision after a reasonable investigation?

Examples of what might make a decision to dismiss appear unreasonable include:

Chris has been employed for three years as a store supervisor.

He has been a model employee and has had no previous disciplinary issues.

He normally catches the bus to work and arrives well in advance of the start of his shift.

One week in the winter Chris’ bus does not arrive on four occasions. He calls a taxi from the bus stop but on three mornings he arrives 15 minutes late for his shift.

Chris is dismissed for poor time-keeping. Burchell might apply here because choosing to dismiss a normally reliable employee for arriving late on just three occasions might be seen as unreasonable.

Joe has been employed as a security guard outside a nightclub in the city centre for 8 years.  He enjoys his job and has a good reputation with the management.

A drunk customer complains that Joe spat at him on Saturday night. Joe denies the allegation and Joe’s colleague, Darren, who was there at the time makes a statement saying that Joe did not spit in the customers face and that the customer was trying to make trouble because he was not allowed in to the club.

Joe is dismissed because the management say they have to take all allegations seriously and that the customer is always right.

Joe’s employer has failed to take his previous good conduct into consideration or to believe Darren’s statement.  Joe’s employer could not have reasonably believed that he was guilty and failed to give equal weight to evidence that made him look innocent as well as guilty.

It is worth noting that following the case of Monie v Coral Racing Ltd 1981 ICR 109 CA the Burchell test does not apply when more than one employee is suspected of the same misconduct.

In this case two employees were the only possible suspects after money went missing from a safe.  The employer chose to dismiss both employees when they couldn’t produce evidence to absolve themselves even though it could not be proved that either of them was actually guilty.