Discrimination is being treated unfavourably as a result of your: 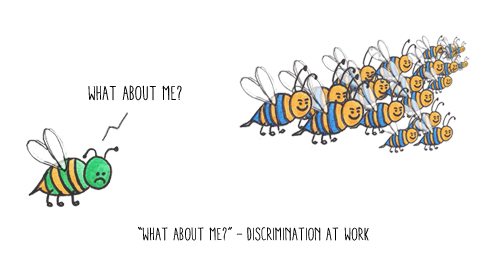 There are many ways in which a person may be discriminated against (treated less favourably). The law breaks down discrimination into four main areas or types:

Direct discrimination describes the situation in which a person is treated less favourably than other employees because they hold or don’t hold a particular ‘protected characteristic’.

[color-box color=”blue”]For example, Mr P applies for a job working as a cleaner in a hotel. He is turned down for the role on the basis that the company only employs females to work as chambermaids in its chain of hotels. This is a clear case of direct discrimination.[/color-box]

Indirect discrimination is a more complex area; it does not consider whether people have been treated differently but whether a ‘provision, criterion or practice’ although applied equally to all employees has the effect of disadvantaging a person or people holding a ‘protected characteristic’.

The example below illustrates how this type of discrimination might come about.

[color-box color=”blue”] A security firm is seeking to recruit a new member of staff to work as a doorman outside a nightclub.  In the advert it stipulates that all applicants must be of heavy build and at least 6ft tall. This is an example of indirect discrimination because the height restriction, although applying equally to all, is more likely to rule out female applicants.[/color-box]

There is however a defence to discrimination if it can be shown that the measure is a proportionate means of achieving a legitimate aim. Section 19(2).

Harassment is unwanted conduct in connection with a particular protected characteristic. It covers the sort of bullying and mistreatment that people are all too frequently subjected to in the workplace. Employers have a duty to prevent this from happening to you and are vicariously liable (responsible) for the acts of members of staff.

[color-box color=”blue”]For example Mr P is a Muslim. He works as a forklift truck driver in a warehouse. He enjoys his job but when he is on his lunch break in the staff canteen he is harassed by colleagues who make derogatory comments about Muslims in general and about Mr P in particular. He finds this extremely offensive and upsetting. He complains to the site foreman but is told to ignore them or sit at the other end of the canteen. The unwanted conduct that Mr P is being subjected to is harassment.[/color-box]

Although frequently used interchangeably with harassment, victimisation has a specific legal definition. It describes the situation in which a person is subjected to a detriment (treated less favourably) because they have made a complaint about discrimination; issued a claim to an employment tribunal or given evidence at an employment tribunal. They may have done any of these things on their own or another’s behalf.

[color-box color=”blue”]For example Miss E works in a shoe shop. She has acted as a witness at an employment tribunal in which a former employee of the shop made a claim for sex discrimination. Miss E subsequently applies for a management position in the shop and is told that she is not considered to have management potential because she was disloyal in supporting her former colleagues claim. Miss E is being victimised – subjected to a detriment on the grounds of her giving evidence in connection with proceedings under the Equality Act.[/color-box]

When to Issue a Discrimination Claim

In many areas of employment law a minimum length of service exists before an employee may bring a claim to an employment tribunal. (For example, a claimant needs to have been employed for two years before bringing an unfair dismissal claim.)

In cases involving discrimination there is no minimum length of service requirement. This is because a person may be discriminated against during the recruitment process. There is one vital stipulation as regards time however; a claimant must bring a claim within three months of the last detriment. In other words, an employee may refer to previous acts of discrimination but one of those acts must have been within the last three months at the point of issuing the case to an employment tribunal.

Harassment
Victimisation
Can a single negative comment be dicrimination