Originally conceived to prevent women from being dismissed upon marrying, marriage discrimination now prevents those who are married or civil partners from being subjected to any type of discrimination.  Section 8 of the Equality Act 2010 does not protect:

Who is not protected?

People who are not married or civil partners are not protected by the Equality Act 2010.  This seems obvious but is in stark contrast to other protected characteristics.  For example, religious and belief discrimination under section 10 of the Equality Act 2010 states that religion means religion or lack of religion.  In other words, a person can make a claim for discrimination if they have been treated less favourably because they are not religious.

For example, a person should not be turned down for a job because they are not a Christian.

Contrastingly, a person who is not married could be lawfully rejected from a job or denied promotion on the grounds that they are not married. In the same way a company could refuse to pay death in service payments to a cohabitee or a partner in a committed relationship even where the couple lived together and had children. 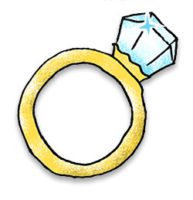 In theory even being discriminated on the basis of forthcoming marriage or civil partnership is permissible.  A person could be lawfully dismissed upon becoming engaged.  The law appears to have seen sense to some degree and in the Employment Tribunal case of Turner v Turner [2004] took into consideration the Right to Marry under Article 12 of the European Convention on Human Right – incorporated into British law by the Human Rights Act 1998.

Marriage to a particular person

In the case of Hawkins v Atex Group Ltd [2012] a woman was dismissed because her husband, the Chief Executive had been asked by the company Chairman not to employ members of his family as the company should not be run as a family business.  Mrs Hawkins argued that she was dismissed on the basis of marriage.  Had she not been married to the Chief Executive she would not have been dismissed.  The tribunal decided that no marriage discrimination had occurred.  It was not because Mrs Hawkins was married to her husband but the fact that she was in a close relationship with him which happened to take the form of marriage.